There is still a lot of time before the long-awaited premiere of the mobile game Call Of Duty. Fortunately, the creators of the game do not intend to keep all information about their production secret, and with each subsequent week they bring us curiosity about creating portable CoDs that feed the atmosphere and shed a bit more light on what we will deal with immediately. its premieres.

The first announcements of Call Of Duty Mobile appeared exactly a year ago. At that time, we knew little about the gameplay itself, except for the fact that we would have to deal with a free game. In March of this year, the first, interesting, information hit the network. Including the approximate date of the premiere, to be held in 2019, or a change of studio, which will prepare this cover. Tencent took over the steering wheels – known among others from the still popular PUBG. Last weekend, Activision published additional information about Call of Duty, including, among other things, the modes in which we will be able to play, or the cards on which duels will be played.

Call of Duty Mobile is 5 main modes that are focused on multiplayer. Classic Free-For-All, in which up to 8 players can fight and only one can win. Frontline, Hardpoint, Domination and Team Deathmatch – modes for 10 players offering different mechanics – from protecting points on the map to team matches. As expected, in the mobile version of Call of Duty will return cards, known for large versions of the game. These include Crossfire, Killhouse or Crash from Call of Duty 4: Modern Warfare, Standoff from Black Ops III, where it was called Outlaw, or a map modeled on one of the Black Ops 4 boards. However, the creators guarantee that the game will have a single games. 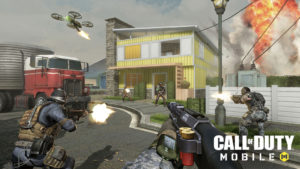 Beta Call of Duty Mobile is getting closer

Activision also reports that closed beta tests of the new Call of Duty, in the version for Android, will start this week. Initially, this is happening in India, but in the coming days, servers for players from Australia will be launched – this country, like New Zealand, is often the first to receive early access to long-awaited products. A similar situation occurred with the new Harry Potter universe in augmented reality – Harry Potter Wizards Unite or the newest production in the world of Pokémon – Pokémon Rumble Rush. In the coming weeks, the beta version will be available in the following markets – we hope it will appear in Ukraine soon.

Now you can pre-register with Google Play to be able to access this game earlier. Entries are also made through the official website of the game. The iOS version is still in preparation, and the beta version should be launched in the next few weeks.