Puzzle games rarely have anything to do with bloody shooters in which we must kill the greatest number of opponents. In Shootout 3D, it’s … just the opposite. The player must turn his head and find a way to destroy all opponents while making sure that no rocket hits the hero we control.

We see each level from above. A different number of heroes appear on the boards, as well as various obstacles that make it easier or harder to hit the target. Each character has a weapon equipped with a laser sight. If our character turns around, the same movement will be made by opponents. So the point is to hit the enemy and avoid the ball yourself. Sometimes the intersecting lines of the frame resemble images created with a spirograph. However, there is always a way to make the character correctly eliminate enemies in a few moves and live to the end. 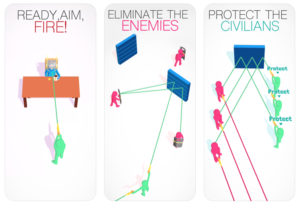 In order to come up with a theme for the game, that is, if it were not for the murder, the creators of Shootout 3D diversified this “fun” in effective ways of the death of our opponents. After the enemy reaches our sphere, blue confetti, pink fog or colorful bouquets of flowers can fly out of it. There are many more such variations, and we will open them at the next levels of the game that we can go through. Wanting to get these disgusting “treats” faster, we can often agree to view ads. This way we get more crystals, which we will later exchange for new types of enemy deaths.

The leitmotif of the game is killing enemies with a pistol, so this title should not be used for children’s smartphones. However, you must not hide that this is a puzzle game. Older players looking for unusual gymnastics for the brain may find something for themselves. However, you should be warned that there are a lot of ads in Shootout 3D. Their removal costs about $ 2. For this amount, you can successfully find at least 3 other paid puzzles in the Google Play and App Store that will provide good entertainment without ads. The main version of this name, however, is available for free, so you can decide for yourself whether to stay with it longer.