Brawlhalla is coming soon on iOS and Android. Closed beta testing will begin

Nintendo’s portfolio includes a series that has been very popular in the e-sports world for years and whose success many companies, including Sony, have wished for. Unfortunately, so far no one has been able to jeopardize the leadership position, which is without a doubt Super Smash Bros. The latest version of the game, available on the Nintendo Switch, is one of the most popular games for this console. Ubisoft also has an idea for a platform fighting game that just announced that Brawlhalla will appear on mobile devices next year.

Super Smash Bros – the game is so complex that not everyone will like it. We tried several versions – on Nintendo Wii U, 3DS and Switch. And they did not find a place for themselves in any of them. Although the rules seemed simple, the mechanics and fights were difficult for us. Brawlhall, although under assumptions, is very similar to Super Smash Bros., should offer a more simplified gameplay, offering similar solutions.

Will Brawhalla repeat the success of Super Smash Bros.?

Brawlhalla is a free epic fighting game in which up to 8 players can play simultaneously or locally on the Internet. Take part in open battles, join rating matches or create your own room with friends. Millions of players. Frequent updates. Over 30 legendary characters. Come and fight for glory in the chambers of Valhalla!

Yes, we can read about Brawlhall on the game’s official website. This name is now available on PC, Xbox One, PlayStation 4, and Nintendo Switch consoles. Soon it will appear on devices with iOS and Android and will allow you to have fun together with players from other platforms. 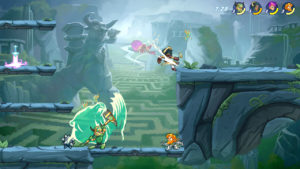 The Brawlhalla version for iOS and Android is not announced until 2020, however, no details have been reported, although the first months of next year are mentioned. Developers are already inviting for closed beta testing. They are prepared for users of both platforms. To sign up for testing, just go to the game’s official website and fill out the form in which you must enter an email address, which is also an Apple ID or an account that allows you to download games and applications from Google Play. Soon, the first players will receive invitations – interest is high, and it is not known whether anyone will get access. Expect yet another Viking post from Brawlhall as soon as the title moves to the App Store and Google Play.

What Role Does Optimization Play in Your Conversational Growth Strategy?

Below are some of the best strategies and tactics to improve your ARPU. For instance, if your ARPU is only $20, like in the example above,...

Many local newspapers had online personals in the mid 1990s but were bought out by these big dating sites. From some of the comments it...