Captain Planet in the fight against environmental pollution

The game takes place in the early nineties of the last century. It is based on a series about environmental protection and teaching pro-ecological relations. Captain Planet and planetariums were among our favorite cartoons, and we still remember. The brand is still popular today. Even games are created – including for mobile devices. Captain Planet: Gaia Guardians – the game is dedicated to fans of the series, and for people who have never played it, but would like to know how to take care of our planet – just on its day – April 22.

Wheeler from North America flies to you with firepower, Link from Eastern Europe, driving the wind, Guy from Asia with the power of water and Ma-Ti from South America, possessing the power of the heart. 5 heroes who receive special rings from Gaia – the mother of the Earth – fight against Doctor Zaras and the corpses of aliens who want to pollute the Earth at any cost. Rings are able to cause Captain Planet, endowed with superhuman superhero power, which protects the environment and fights pollution.

Captain Planet: Gaia Guardians, unfortunately, is not a game of disclosure. This is another duplication of the genre, for example, clickers. This game model popular in recent years does not require too much player attention. It is true that at the beginning it is worth spending about a dozen minutes to learn the rules of the game, but we quickly understand that the game will do all the dirty work for us. We have planetariums at our disposal, but we will start with only one of them, Quamema. He is the leader of the planetarium and the owner of the power of the Earth, who will fight the pollution caused by Dr. Zaraz and his partners. 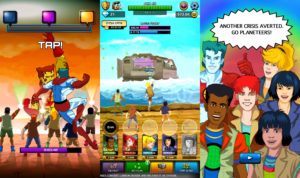 Over time, more and more heroes will join the team with a set of various personal skills that can be developed thanks to special cards obtained after battles with the main boss in this phase or opening the boxes. Resetting the cycle, in addition to increasing character stats, gives you Folum points that allow you to restore the normal state of Hope Island, which was destroyed by pollution.

In Captain Planet: Gaia Guardians can not be micropayments. We can buy diamonds or skill sets with diamonds and coins. Diamonds will help you quickly open the map, increase the multiplier of points, which will allow you to increase the level of heroes, or unlock their following skills.

The game is available in the App Store and Google Play in the universal version for free.