Evertale – explore the world of monsters

Evertale is a well-known game by Japanese developer ZigZaGame. Players need to catch, kill, and train monsters. You’ll explore fascinating landscapes, fantastic creatures, and even mythical dungeons. The game involves all of this diversity.

Evertale: amazing gameplay and other benefits

In Evertale, players need to catch and train monsters using a variety of weapons. Besides, you’ll notice the original equipment to improve your soldiers’ fighting skills. You’ll need this to destroy a curse emerging once per a hundred years.

Players will build a strategy to defeat the enemies. You’ll find ways to oppose the monsters using a variety of strategic combinations. I like in the game the opportunity to go online because you can form a coalition with other players and find secret crystals.

All of these aspects mentioned above form incredible gameplay. Also, Evertale has an amusing graphic design. All the details prove a high level of the developers’ professional skills. While playing, the game focuses your attention on the plotline to its end. You can’t take your eyes off the game.

Evertale – a mixture of RPG and strategy

Evertale is a unique com 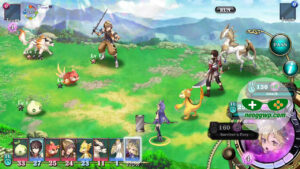 bination of RPG and strategy where there is the level gradation of difficulty. For example, players will think through all the measures before making a final step. Thus, they will need to predict future attacks and make every step carefully. Unfortunately, the game has some bugs including the language. It means that the game supports only the English version. So it will be a nightmare for non-English speakers to deal with that.

Nevertheless, Evertale makes it hard to stop playing. The music background elaborates on the plot and makes it even more fantastic. Besides, it’s comfortable to control the game sensors. Bright colors and well-depicted graphics in combination with other elements create a playing masterpiece.

So, if you’re a fan of RPG and strategy mix, then you need to play this game.