Hungry Shark World is currently one of the most popular mobile games. The game is trying to set you on the thrill, which is depicted in the movie “Sharknado”.

Big eat small: this simple game principle of this game. An extremely simple browser game controls the fish that feed on small fish. With each meal, it grows, which means that it can catch more and more fish. Even the popular “Slither.io” works according to this scheme.

In Hungry Shark World, which is available for Android and iOS, you are a shark in the sea and eat fish, crabs, divers and fat tourists on inflatable mattresses so that your shark does not go hungry. At the same time, you must be careful not to be swallowed by other animals. Big eat small – this is the motif of Hungry Shark World.

But this is not as easy as in other games. The food chain is more complex. You can not blindly trust and eat everything. Jellyfish and large crabs swim in the sea, causing damage to the shark. To master them, you need a big shark. However, you do not get it for as many fish as possible. Instead, during the game you gain experience points that can unlock larger sharks.

In the game you move further and further, increasing your shark. In between, you can invest points accumulated in the game to make the shark faster. Of course, this can be reduced to 99.99 euros in-game purchases. Here the principle – “eat or pay”. But honestly enough, you have to give the game a free basic version and at the same time do without an annoying advertising banner … From time to time you will have to watch a commercial.

Management is simple, the shark can be led with one finger on the water. But this is the only really simple thing in a complex game. The good thing is three big, winding game worlds. However, the details overload the game too.

In addition to the complex food chain, there are several ways to earn points. The letters that make up the word “hungry” give extra points. In addition, the player can equip the shark with all sorts of add-ons, such as a small companion shark. He can solve problems, such as the number of tourists eaten, he can activate the acceleration to accelerate the shark in the short term. All this makes the game confusing.

At the initial stages of the gameplay, we recommend that you buy a map for your first location. This will give you an advantage: you will not need to chase after random schools of fish and victims who swam behind the buoys.

The map will also help you find out the location of the 2 letters from the word “HUNGRY” and show where the chest with gold is hidden. 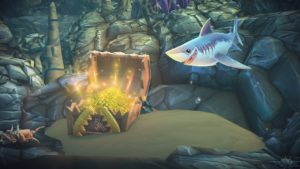 There is also rich graphics, which may seem exaggeratedly cruel to some players: if a shark brought a sacrifice, a long trail of blood flows through the water. And when he attacks the swimmers, he comes to a detailed animated battle between the shark and the man, which is accompanied by shouts. This is probably why the application is recommended only after 12 years.

Slaughter gives the game an easy horror. Thus, it almost acts as a gaming counterpart of famous cult films, such as Mega Shark vs. Giant Octopus, Sharktopus, or Sharknado TV series. The latter is dealing with sharks, which hurricane throws ashore and causes all sorts of harm in ridiculous scenarios. 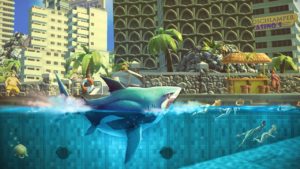 The fact that the creators of Hungry Shark World were inspired by these scary sharks shows the initial sequence before each game: in it the shark falls from nowhere into the sea before it can go in search of food.

Hungry Shark World is available for free on Google Play. To install the application on your smartphone or tablet requires Android 4.4 or higher.

An application for iPhone, iPad and iPod touch in the iTunes app store

“Hungry Shark World” – a game with a classic thoughtful food motif. The player controls the shark, which leaves a trail of blood in the sea in search of food … But still the shark itself can become a victim at any time of the game!