Mini Metro: strategy of creation subway system in your hands

Nowadays Mini Metro is one of the most popular brainstorm games. It allows many people to develop their creative and cognitive mind. The main goal of the game is to make subway lines in different cities worldwide. Gamers need to create a subway’s structure of the city in a way that allows trains and trucks to work efficiently.

You can ask me why do I like this game? I would say that the game allows you to become a construction designer and compete with people in different modes.  Mini Metro is a perfect game for those who like to brainstorm skills and logic in a real-time mode.

Obstacles in achieving the goal in Mini Metro

While playing the game, there are a lot of obstacles waiting for you: 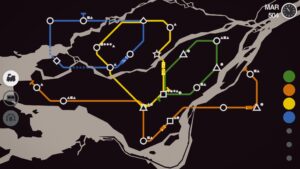 While playing the game, modes availability allows us to control the level of difficulty. The game has three modes including a General mode for a quick game, an Extreme mode for a tense fight, and an Unlimited mode for relaxation.

It is up to you to choose the mode, which one you like the most. This choice depends on how well you are prepared to fight with competitors and your own goal in the game. You can start with the general mode. Then when you understand the variety of the principles used in the game, you can switch to the extreme mode. There you will need an immediate reaction and a speed of actions. Of course, if you are tired of this constant brainstorm, you are welcome to join the unlimited mode for relaxation.

In 2019, Mini Metro’s developers made an update in the game. They added one more city to the already existed cities’ list. Who is fond of Spain will understand the choice of this amazing city of Barcelona. It is great news guys! Although a lot of gamers choose only one city to develop the subway system, I would say that with more cities involved in the game, there is a higher chance to discover something new in the subway’s development. However, at the beginning of the game, you can choose only among three cities and then if you are becoming an advanced player, there are new cities to discover, but the old ones will be closed.

If you are the same fan of quests and brainstorm games, then you are welcome to join the updated version of Mini Metro.