A long time ago, MudRunner Mobile appeared on consoles and immediately won the sympathy of fans of the genre. Despite the fact that the user interface in the new version was developed specifically for mobile platforms, thanks to the love of gamers, familiar cars, familiar maps (with simplified graphics and adaptive controls, of course) and the same physically cross-platform Havok engine await you.

By the way, the adult MudRunner was originally created for the competition of products of that very Havok Physics. It was a simple demo showing the capabilities of the engine. But contrary to all expectations, it was so warmly received that it soon grew into a full-fledged game.

MudRunner Mobile, as you already understood, is an off-road driving simulator. The goal of the project is the transportation of goods on Soviet all-terrain vehicles through the deep Russian taiga. And there, naturally, there are practically no paved roads. But a bunch of difficult forest clearings. Here you will have to fight not with huge complex bosses, but with a harsh landscape (no less vicious by the way) armed only with a map and a compass.

The main feature of the entire game series is, of course, dictated by this very physics engine Havok. Your cars will leave behind deep ruts in the road, making it difficult for subsequent passage or bury their wheels in soft ground.

On each track, your environment will change every time and you will have to put really a lot of effort to win the race. Have you ever wondered, for example, how difficult it is to turn a truck with a fixed rear axle through a mud track? According to MudRunner, this is damn hard.

The main tasks performed for the delivery of cargo, you will have to constantly be on the alert and monitor the fuel level and the integrity of the car.

More than 15 Russian cars, including VAZ, Ural and Kamaz, will be available to you. The developers promise us a variety from light track reconnaissance vehicles to heavy military trucks. Each car is packed with unique characteristics and can also be upgraded using additional equipment. As for the cards, there are only 15 of them (sandboxes and challenge mode). 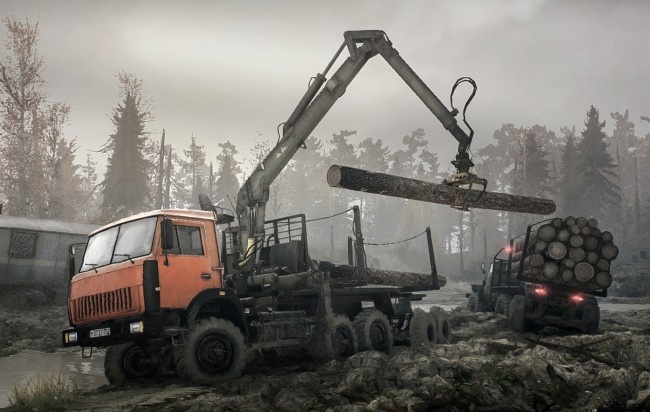 Drive along muddy roads, cross dense forests, overcome rough rivers and swamps, and climb stone cliffs. All this for your entertainment in MudRunner. But don’t forget about advanced physics. The entire environment of the game realistically reacts to the weight and movement of your ATV, rewarding for successful maneuvers and punishing mistakes. But most of the time, MudRunner wants to drown you and your car in mud.

In general, if the physics engine functions in mobile devices in the same way as in the adult version, there will be no price for such a project. The entire series of games is unique, but the rather high level of difficulty of passing and the obvious lack of speed and dynamics make the project quite specific. But still, be sure to try yourself in the role of a brutal driver and draw your own conclusions.