The game’s developer Oddworld Inhabitants has significant experience in making outstanding series about “Strange World”. They released the game Oddworld Stranger’s Wrath back in 2005 with its ongoing update in 2015. Although there are some improvements in a recent version, new smartphones don’t support them. We hope that developers will take this key point into account in their recent version. 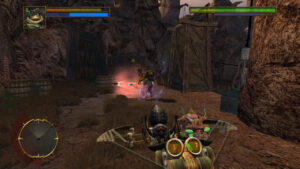 Developers designed the game in the platformer’s genre. In Oddworld Stranger’s Wrath, the Stranger who is Bounty Hunter must earn 20,000 mules (mules are the local currency). The Stranger needs to take terrible bosses. He will get a reward for their heads. The Stranger has a crossbow. To track down evil bosses, there are two modes in the game. The first mode is designed from the third person, the second mode is from the first one. This is not always convenient to manage. After you track down the criminals, you need to trap them using two methods. You can catch them alive or already dead. The reward’s level will be higher in the first case. Your task is to explore unfamiliar territories, enterprises, natural wonders. Fight with bosses armed with diverse weapons and catch them.

Oddworld Stranger’s Wrath – how relevant is the game

In Oddworld Stranger’s Wrath, you will meet a variety of monsters including eccentric locals, scary enemies, and strange aborigines. Players will need to figure out who is who, using various strategies. The game has an impressive graphic design developed to the smallest detail. Here you will find an exciting story, a unique musical design, and even fantastic natural landscapes. Thus, the gameplay is a masterpiece. The humor here is also rare. An entertaining story that has become the plot’s foundation presents its relevance. The game, released 15 years ago, remains at the top.

You need to pay for the game. However, believe me, it costs this money. After downloading it, you will not regret, because although the game’s version is rather old, it is the best in its genre.

If you are a fan of action, then try to fight the awful bosses in Oddworld Stranger’s Wrath.