A simple arcade game is a type of game for which we have a unique weakness. Most often, there is no need for any complex control, graphics that warm up our smartphones to reddening or exciting history. Enough good ideas and thoughtful work. It just works! This is how it happens with Tiles Hop, a good game in which our task is to jump between tiles and aim in order not to fall.

“Thaw”, adjust to the rhythm, quickly and captivatingly from the first note. This is what Tiles Hop means to us, that it’s not for nothing that it has been included in the rating of the most downloaded free games by users in our country for a long time. The mechanics of the game is a child’s game based mainly on the dexterity of fingers on the screen. The basis – accuracy – to get to the right place and not fall to the bottom. And so it was not boring – we have a whole set of songs to “jump over”.

Reaching the end of one song – unlock access to the next. The creators of the game argue that for the interest of their children, they regularly add new songs to the set, which serve even more challenges.

Tiles Hop’s visual design is not very complex and not very attractive, but it does not matter. Due to the soundtrack and high reproducibility, the game compensates for everything else – proof of this is the popularity of this game. It is worth noting, however, that dozens of annoying advertisements distract us from the entrance, which are placed as far as possible. Advertising is easy to manage – if you plan to spend a long time with this application, it is worth spending $ 3 as part of the transaction in the application to be able to remove it.

Buy also crystals that will allow you to continue playing when we are sophisticated and then open the following songs – this is a good nod, but they will definitely not be included in the mandatory purchases for the game. 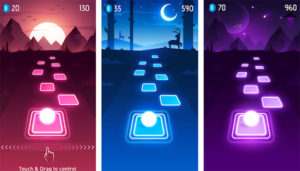 Tiles Hop is an example of a simple arcade game in which everything goes in time. And … it just works – as expressed by anyone who gives this opportunity a chance. The game is available in the App Store and on the Google Play platform in the universal version for free.