Zen Koi – your own Zen pond

The standard of living in developed countries has grown significantly in recent years, but this phenomenon has a downside and a name for it stress. Stress at work and / or at home, from endless accumulating fatigue, from public transport, etc. This explains the growing number of applications directed not at a specific result, competition or achievement, but simply on relaxation. An example of such a game is Zen Koi. This, of course, is not a salvation from stress, but distraction will definitely help. 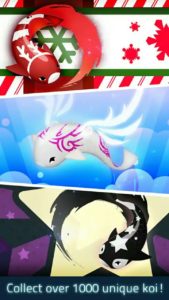 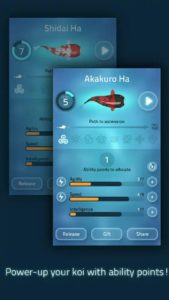 Zen Koi is a fun relaxing game in which you can pass the time without much effort by controlling a beautiful fish. In this game we have to raise, feed the carp, which would later turn it into a fairy dragon. With each level the pond becomes larger and new inhabitants appear in it. It is not only small organisms needed for food, but also other carps. With them, you can cross your fish to get offspring of a new color, in order to later turn them into dragons. Thus, carp breeding can be used to assemble your unique collection. Different fish also have their own characteristics that affect swimming and offspring. 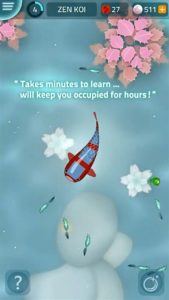 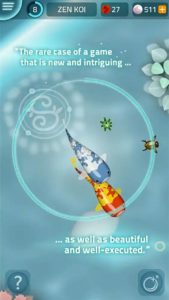 The game is endless and free. It has a nice relaxing music, colors are not bright, and the gameplay is very simple. Just click on the area on the screen to send your fish there. To the game does not seem meaningless, the developers have introduced some goals and rewards for them. Help your carp to catch a certain prey to get a bonus for it and then improve his skills.